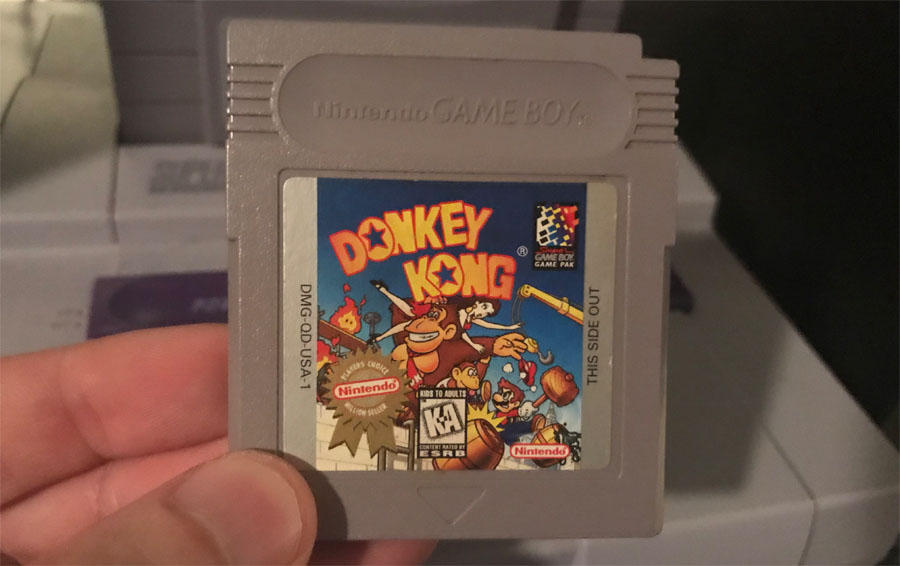 A Donkey Kong game as an Obscure Gem? Well, actually, yeah. Before I lose everyone who thinks this game is just a port of the original Donkey Kong arcade game, I want to shout from the top of the Empire State Building to you that it most certainly is not! This game has a ton of unique levels, but the new ones come AFTER you play the already familiar ones, which maybe be what confused people and made this game fall into obscurity.

This game was pretty popular when it was first released, but I don’t hear anyone talking about it anymore. This was released in 1994 when Nintendo was cranking out masterpiece after masterpiece, so that’s probably how this wonderful little Game Boy title quietly faded into history. I don’t know if that’s the reason for sure, but that’s my best guess. Anyways, this game is brilliant, and you should play it.

To the best of my knowledge, this game has the best Super Game Boy enhancements of any game that was ever released.  The added colors are absolutely gorgeous.  If you decide to play this game, please play it on a Super Game Boy to get the definitive experience.  You’d be doing yourself a great disservice otherwise.

This game is a spiritual sequel to the original Donkey Kong arcade game. The game starts off with the 4 levels from the original arcade game, but after you’ve completed them, the game keeps going for 97 more levels.  Mario has some extra movement options this time, so if you know how to do them, you can make a mockery out of these first 4 classic levels:

Mario’s moves are… a bit more advanced this time around.

After beating the 4th level, Donkey Kong interrupts the ending of the arcade game and captures Pauline again, and the chase continues. At least this game doesn’t make you wait forever to get to New Donk City.

The game has a great variety of levels.  You go through a cycle of 3 normal adventure levels where the goal is to pick up a big key and put it into an exit door, and every 4th level is a vs. Donkey Kong level that is a random grab bag of all sorts of cool ideas, such as a level from Donkey Kong Jr. or a boss fight with DK himself. This game is really hard to put down because there’s always some incredibly rewarding surprise waiting around the next corner.

It’s hard to really say what kind of game this is because of its wide variety of gameplay, but I’d say at the end of the day it’s a puzzle-platformer with more emphasis on the platformer aspect. … and you never know what you’re going to get with the vs. Donkey Kong stages. If you find all 3 of Pauline’s items in each level, you get to play a mini game for extra 1-ups.

If you’re a game developer, I really would like to encourage you to play this game for inspiration. There’s a lot of really unique ideas in this game that you really don’t see often.

Cutscenes can often be a problem in games, and Donkey Kong ’94’s approach to storytelling is unintrusive and actually relevant to the gameplay. You get to watch a brief humorous cartoon that also gives you hints on how the game mechanics work.  They’re also being played over your score summary for the last 4 levels.  I think this is a brilliant way to compromise the desire to have cutscenes but also not interrupt the flow of gameplay like so many cutscenes do.

The cutscenes really are worth paying attention to.

Another thing that feels fresh about this game is the way it approaches giving variety to its enemy characters.  Mario can only take one hit of damage before he dies, but not every enemy can kill him.  Some enemies are fatal to the touch, but some enemies are moving obstacles that Mario can touch or even ride on top of.  However, these “non-lethal” enemies can kill Mario by pushing him into deadly hazards or squishing him against a wall.  There’s also enemies that can temporarily incapacitate Mario instead of killing him.  And because of the puzzle aspect of this game, enemies are sometimes part of the puzzle that needs to be solved.  The game is constantly introducing new bad guys to deal with and it all feels very diverse and interesting.

I could have taken the ladder to the left, but I wanted to do a ladybug backflip instead.

One other thing I love about this game is how they figured out a way to make falling damage interesting.  If Mario falls from a short distance, he gets to land normally.  Fall from a little bit higher, Mario has to do a roll to recover, making him temporarily very slippery to control.  A little bit higher than that, Mario lands on his face and can’t move for a little bit, making him vulnerable to threats.  Any higher and well..

There’s something legitimately heartbreaking about the way Mario bonks his head and dies.

After giving it some thought, I think I realized why this game is designed so well. Most things in this game have more than one use. For example, the key you’re supposed to grab to put in the door to beat the level can also be used as a weapon, and also as an object to stand on to get to higher places or get over spikes. Enemies can be interacted with in multiple ways.  Everything in this game can be played with like a toy and there’s a lot of opportunity for creativity, and overall it feels like each level is a fun playground to jump around and play the way you want to.  There’s so many different ways to clear a level, and the puzzle aspect doesn’t feel quite so restrictive because of it.

The controls in this game are perfect and tight, but they’re also just fun to use.  Everything feels great, and the combination of the well designed controls with the punchy sound feedback gives this game a very pleasant, tactile quality.  Even holding down the button to grab a switch and using the D-pad to move the lever in different directions to activate it feels really nice.  It’s hard to explain in writing, but you’ll see what I mean if you try the game yourself.

I think this game is an absolute knockout and a masterpiece. It absolutely does justice to its concept as an extension of the original arcade game and stands out as a truly unique puzzle-platformer.  It’s obvious to anyone who plays this game how much love went into making it.  Make plans to play it someday, it’s truly a game you shouldn’t miss.