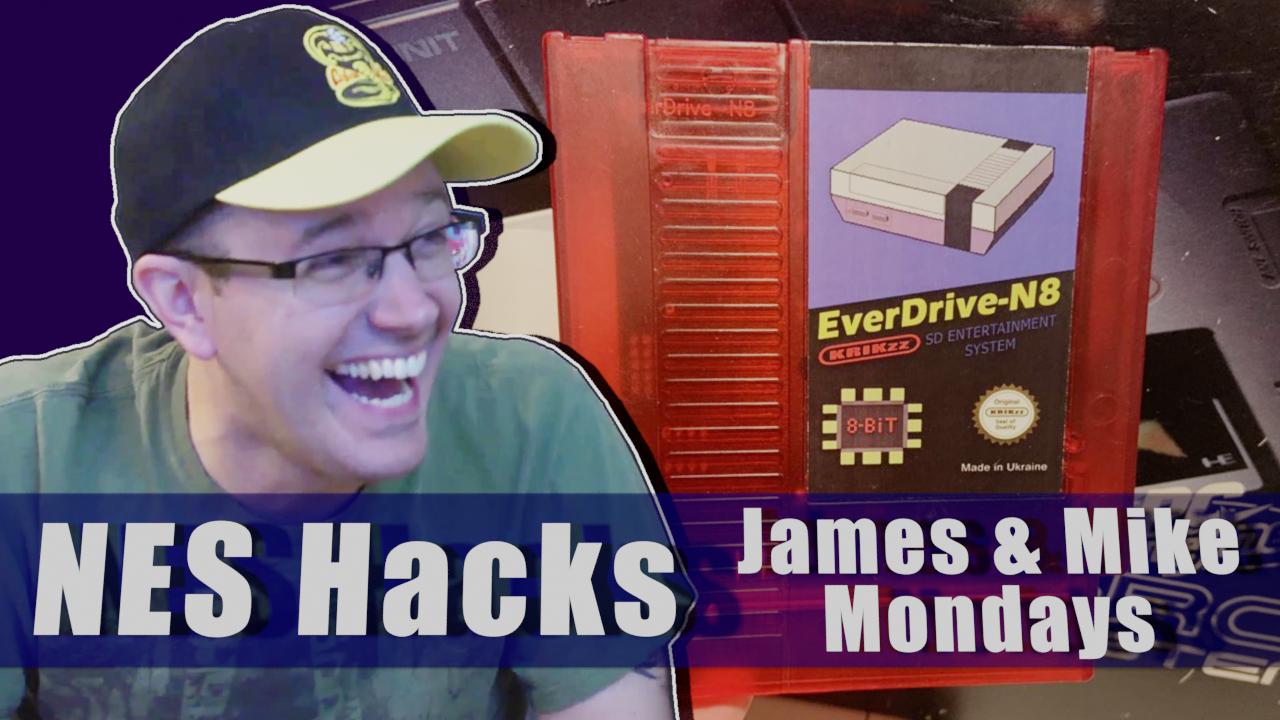 Playing NES hacks is a tradition that goes all the way back to the very first episode of James and Mike Mondays. This week we sat down and just browsed through an Everdrive N8 packed full of them. We’re always looking for more suggestions of hacks to play, so please let us know if you have any good tips.  The comments below this post is as good a place as any to post your recommendations.

It seems like the vast majority of hacks simply change the graphics in the game, such as Riddler Tennis and the RC Pro Am Mario Kart hack we tried in this video.  While I appreciate the work people put into these sprite hacks, I’m more interested in hacks that drastically change how the game plays, such as redesigned levels.  That being said, changing the graphics AND the level layouts is even better.

Castlevania: Stairs of Doom was interesting.  I was sure that we were about to play a game intended to troll the player but it was built off a solid concept.  It definitely demonstrated that there’s more than can be done with staircases in Castlevania than we’ve seen in the base games.  I’m glad there’s so many different Castlevania hacks that have been made, and I’m still working on trying them all.

If I could make a Castlevania hack of my own, it’d be it a He-Man and the Masters of the Universe conversion.  You’d play as He-Man and use the Power Sword instead of a whip.  Perhaps the Mummies could be Two-Bad and Frankenstein could be Tri-Klops… there’s lots of possibilities.  Levels would take place all over Eternia, there’d be a Castle Greyskull level and it ends with a final fight with Skeletor at Castle GreySkull.

Dead Double Dragon Twins was funny, but unfortunately the joke gets exhausted pretty quickly and there’s not much else to explore beyond it.  Druggy Final Fight was a graphical hack that added visual gags into the background and changed the text dialog to be hilarious, and I think it worked better because you have to keep playing the game to discover more of the changes.  Still, without any significant gameplay alterations, there’s not a lot of staying power with these simple graphical joke hacks and there’s not much reason to play them more than once.

Super C: Out of Control was great. James and I are both decent at Super C, and it’s a game we have played together many times.  Taking a game and ramping up the speed and insanity seems to be a really solid concept to base a romhack on.  You can see in the video how James instantly got fired up as soon as he started playing, and he wanted to keep going.  It’s frantic and exciting.  I might try to beat this one on a Twitch stream someday.

I recently got an NES N8 Everdrive, SD2SNES (SNES) Mega Everdrive X7 (genesis) and one for GBA, which also lets me play GameBoy Color and original GameBoy games.  Ultimately, I still enjoy collecting real carts but if you want to play romhacks, putting them onto these devices provides the definitive experience.  You completely bypass the limitations of emulation by playing on real hardware, and you can play them on a CRT monitor.  An emulator running on an LCD monitor just isn’t the same, and you really have to try it out to see the difference for yourself.

I’ve played through a few great hacks. Superstar Mario World is probably the best Mario hack I’ve played as of the time of this writing.  It’s packed with all brand new level designs, great color choices and a difficulty I found to be just right for me.  It also includes a very smart mechanic where collecting 100 coins makes Mario invincible for a short while instead of giving you a 1-up, and then discarded the whole concept of a life count.  I found myself much more interested in collecting coins because of this mechanic, and Nintendo might want to take this as a cue to investigate how stale the 100 coins = 1up system has become in Mario games and try out different schemes. I also liked the inclusion of Super Mario Bros 2 bosses like Try-Clyde and Fry Guy. I wish they could have snuck Clawgrip in there somewhere.

I also got to play Castlevania: The Holy Relics which was fantastic. It was about the same difficulty as the original game, which resulted in a fun experience.  While insanely hard romhacks have their place, it’s also nice seeing people target difficulties that you would expect from mainstream NES games of the past.  It got everything right.  Everything is different, including new enemies and bosses.  They also included a new game mechanic in the Relic system that makes it feel like a true new entry in the series rather than a simple romhack.  I consider it to be one of the truly essential romhacks that people interested in hacks should play, and definitely something a Castlevania fan should experience as well.

I’m definitely excited about romhacks lately.  The level of creativity that can go into them and the joy they are providing are genuine.  And the most exciting part is the vast amount of unexplored possibilities.  They are a very effective stimulus for the retro gaming community.  There’s so much that can be done and I can’t wait to see what people come up with in the coming years.