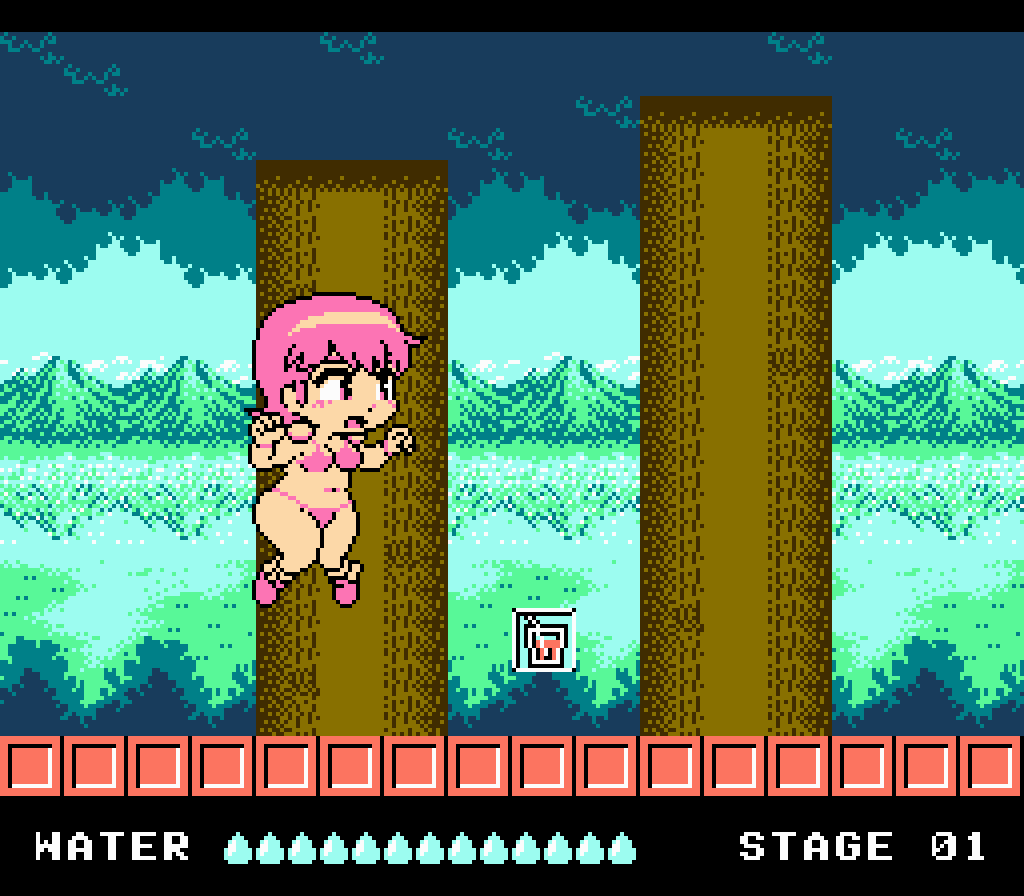 Last year, a new NES game came out.  For real.  It’s called Gotta Protectors: Amazon’s Running Diet, and it was given away for free to promote the 3DS game Gotta Protectors.  As of the time of this writing, I have not played Gotta Protectors, but I’ve played a lot of this companion NES game.  Here’s the free download link if you want to play it (requires an emulator that can play NES games):

It’s an endless runner game based around the main character exercising to lose weight.  She has to collect water to keep running and avoid cakes.  I got addicted to this game immediately and played a lot of it, but as I kept going I started to have a lot of questions about the mechanics.  The scoring system is mysterious and hard to understand, and I was really curious about what kind of scores I was shooting for to unlock the different win screens, which show the Amazon’s weight loss (or weight gain) after her workout.

This game is relatively new, very little has been written about it, and only a couple YouTube videos have been posted.  So, I decided to research this game and post an in-depth strategy guide so the internet has one.

I had my pixel artist analyze the game’s memory with a hex editor to make sense of how the game actually works.  We were able to discover a lot about the game’s scoring system and game mechanics, and also figure out what the all the score goals actually are.

Before we get into all that, let’s talk about the basics first.

The Amazon runs from left to right.  You have a water meter which slowly drains as the Amazon runs, and you get a game over if the meter runs out.  Picking up water power-ups will replenish the water meter, and running into cakes will decrease your water meter.  It’s as simple as that.  Using the Amazon’s moves helps you collect water and avoid cakes.

After the game ends, the amount of calories you burned is your final score.  Running a longer distance will burn more calories, and the amount of cakes you ate while running will take away from calories burned.

You get a score screen showing what the Amazon looks like after her workout, and this is the main motivation to play.  Do you want to actually help her in her goal to lose weight, or do you want to be sadistic and turn her into an immobile blob?  It’s your choice, and both options are quite challenging to pull off.

The fact that this game has two different goals, weight gain and weight loss makes it a lot deeper than it seems at first.  Each goal requires a different strategy.

A – Jump, hold A to jump higher. The Amazon has a bit of a startup time to the jump, so this will take a bit of getting used to.

B – The Amazon does a kick that lifts her off the ground a bit, pressing B again does another kick which lifts her even higher.  There’s no enemies in this game, so kicking is an alternate way of jumping, and can be done in mid air to alter the trajectory of your regular jumps.

Doing well in this game requires a mastery of the triple jump mechanic.

In some cases, you need to chain these kicks together very quickly to get a large vertical leap, and in other cases, you can space out the timing on them to make you fall slower to avoid cakes or nab hard to reach water pickups.

During the two parts where there’s a giant wall of cakes, you have to hold the A button down to jump high, then do two quick kicks with B to get the maximum jump height.  You also have to time it at almost the last second.  You’ll know you did the high jump right when the top of the character sprite loops to the bottom of the screen.

This cake wall is a score-ruiner, so you need to be able to get the high jump in at the right time to get past it.  Remember, there’s 6 consecutive waters that scroll by before the wall comes.

Down+B – The Amazon does a ground slide.  There are many obstacles that are difficult or impossible to jump over, so you can slide under them (some are too low to slide under).  The duration of this slide is very quick, so you have to activate it pretty close to the obstacle you’re trying to avoid.

Up+B – The Amazon does a cool backflip maneuver, jumping up slightly and flying back.  This is a very situational move that will sometimes get you into trouble, but there are certain parts of the game where this is the optimal method to collect water safely without touching cakes.  As the game progresses, it will speed up and backflipping becomes more and more necessary to collect certain water pickups.

The backflip is very situational, but fun to pull off.

Digging Into The Game

All this information was obtained by analyzing the game’s memory during runtime in order to shine some light on the game’s mysterious scoring system.

Kcal is your final score, and determines whether the Amazon gains or loses weight.
Each tenth of a Km traveled subtracts 1 Kcal (just remove the decimal point)
Each cake adds 8 Kcal

Depending on your Kcal score, you’ll get a portrait of the Amazon with her new weight:

The images are silhouetted out for spoiler purposes.

Another thing the hex editor snooping found was there is a hidden multiplier for cakes, which I’m calling the Cake Multiplier.  The game starts with the counter at 0, and every cake increases it by one, then that new number is added to the total number of cakes you’ve grabbed during the entire game.  Grabbing a water will decrease the counter by one.

So, if that counter is at 5, picking up a cake will increase that counter to 6, and the total number of cakes during the play session will be increased by 6.  As you can tell, this can result in your cake penalty score skyrocketing really high if you don’t get it under control right away by collecting water.

So, if you’re going for weight loss, you will be punished heavily for grabbing consecutive cakes, and this sort of Cake Chaining is necessary to get a high score if your goal is to make the Amazon fat.

Summary: Eating too many cakes in a row will result in a cumulative cake penalty, and collecting water reduces this effect.

The game’s map layout, that is the positions of the water and cake powerups (and also points where the scrolling speeds up and slows down), loops every 16 stages.  Stages increment at arbitrary points during each loop, and the stage counter serves as a rough indicator of how far you’ve traveled.  Since the game doesn’t have an onscreen score counter during play, this is the best guess you have as to how well you’re doing.

If you want to master this game, it would be a good idea to use each numbered stage as a landmark to help you memorize which hazards are coming up next.

This part has a very complicated and arbitrary scheme, so i’m just going to simplify the information that’s useful for strategy without giving you a huge table of data explaining every little factor.

The game’s code stores the water meter in a single byte, ranging from 0 – 255.  The game displays this internal figure to the player as a meter made of water droplets.  Water reaching 0 results in a game over, and it passively ticks down roughly every second, starting at 4 per tick and eventually maxing out at 12 per tick (this maxes out after level 16 is over).

Grabbing water always increases your water meter by 40.  This amount never changes as the game progresses.

Grabbing cakes depletes your water meter, and this penalty steadily increases as the game goes on. It starts out at 16 and by the end of level 32 it caps out at 90.  The penalty does not increase beyond that point.

The game’s scroll speed increases as the game progresses, getting quite fast at the end of level 32 and then not speeding up any more after that.  At this point the backflip ability becomes necessary to pick up certain water power-ups.

Getting high scores in this game requires a lot of practice.  I hope the information compiled here will be a useful resource if you want to master this game.

It is possible to get scores high enough to glitch out the win screen, but this was done via cheating with the emulator.  Time may tell if this is even humanly possible to do.

This is one of the kinds of games I really like, a simple score attack game with a lot of depth hidden beneath the surface.  The character animations are among the very best that have ever been pulled off with the NES, and the weight loss/weight gain mechanic is quite a fresh and original idea.  I highly recommend checking it out, especially since it doesn’t cost anything.