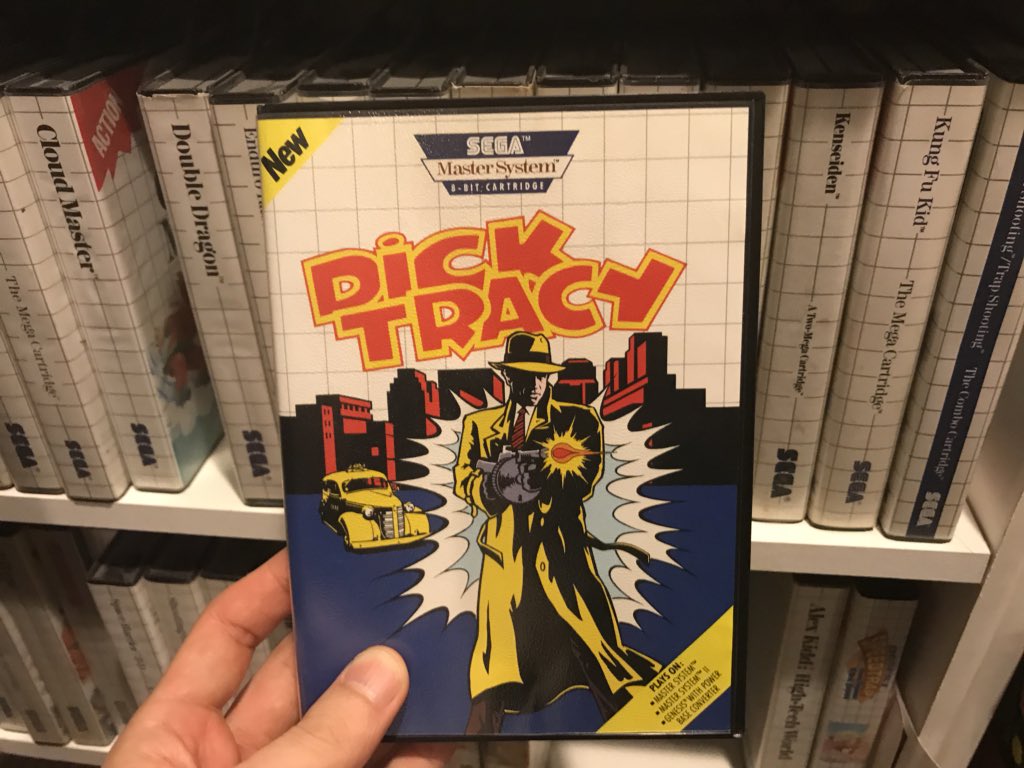 In 1990, Warren Beatty made a film adaptation of the classic comic strip Dick Tracy, and it was rad.  It got beat up by critics when it was new, but just watch it, it’s great.  Trust me on this one, it’s a lot better than its reputation would suggest, and probably more palatable to modern audiences because comic book movies are more of the norm by now.

Dick Tracy as a concept translates very well into a game, because he’s a detective with cool gadgets facing off against vicious gangsters.  It’s sort of like Batman in that there’s nothing about the property that needs to be tweaked or re-imagined in order to make sense as a video game.  But, when it comes down to it, execution matters more than concept.

Cinemassacre has extensively covered the NES game based on the movie, there was an AVGN episode about it and I did a Full Playthrough of it.  It’s for sure a bad game, though I would say it’s not even close to being the worst game in the NES library.  I do have to give the game points for its ambition, though.  It really wanted to be a robust cop simulator, with driving, gunplay and actual detective work, but there’s just way too much wrong with it to be enjoyable.

I’m a really big fan of the Dick Tracy comic strip.  I’m not normally into the the crime drama genre, but Dick Tracy exaggerates things in an over-the-top way that makes it interesting.  The simple black and white lineart gave rise to a lot of very creative character designs, and the villains are very memorable and fun.  I like how surreal it is, and the lore gets incredibly deep.  I enjoy it on the same level as I do Batman, which I hope makes it clearer for those of you who don’t know what Dick Tracy is.

I’ve had this Dick Tracy Sega Master System game sitting on my shelf for awhile now, and I decided to give it a shot.  I was really hoping that I was about to discover another game to add to my Obscure Gems series.  Perhaps you’ve noticed already, but that’s unfortunately not what ended up happening. This is an accurate list of everything in the game, except everything listed sucks.

You start off walking down the street as Dick Tracy, shooting gangsters and jumping over boxes.  There’s an interesting gimmick in that there’s a platforming layer on the bottom, and there’s a shooting gallery element on the top.  Enemies will show up across the street, and you’ll hold down the button and move your gunfire around like a cursor to take them out.  I’m interested in this as a concept, except it’s not executed in a way that’s very interesting.  Shots coming from the background hit you instantaneously, and the controls are so sluggish you can’t really dodge anything, so you’re basically just trying to clean out the top of the screen as soon as enemies scroll up to hit them before they can shoot you. The game also has context-based melee attacks, which I’ve always liked in 2d platformer games because it’s a clever way to give you an extra attack without requiring an additional button.  If Dick Tracy is right against an enemy, he’ll punch instead of shooting his gun.

At this point I was thinking, hey, this game isn’t so bad.

Then as soon as you get to Level 2, the game takes away your gun for absolutely no reason.  My first run through the level, I got slaughtered because you just trade blows with enemy after enemy, and your health eventually will run out before you can get to the end.  Then on my second life, I figured out enemies can’t punch you when you duck, so I just went through punching guys in the crotch.

As far as I can tell, this is the optimal strategy for this level.

There’s some aspects to this you can’t see in the gameplay footage.  You have to push up on the controller to stand up again after ducking, and you can’t move when you’re ducking.  Your ability to move also becomes extremely hampered when you’re taking damage, so it’s really difficult to dodge the molotov cocktails some of the bad guys are throwing.  You basically just try to take as little damage as you can and make it through, but avoiding damage really isn’t up to you.  I discovered that this is a very common theme throughout the entire game.

One thing that really sucks is the “Mega Crush” attack that Dick Tracy has.  You push both buttons together and a quick cutscene plays of Dick Tracy radioing for backup.  The problem is, this is very touchy and it’s extremely difficult to avoid activating it when you’re trying to attack while jumping.  I ended up giving up on trying to attack while jumping, which made the stiff, restrictive controls even more restrictive.  Also, the effect that this grants is very brief and doesn’t do a very good job of helping you anyways.

The game will still be interrupted even if you don’t have any uses of your special backup ability left.

I never could really figure out the correct way to fight bosses.  Dick Tracy doesn’t like to move left or right after he’s done shooting his machine gun, so I don’t get how you’re supposed to run and gun in order to dodge the boss’s attacks.

I beat every boss by just replaying them repeatedly and trying to deplete their health before they killed me.

The key to this game is doing well on the Bonus Stages, which are basically like a Hogan’s Alley shooting range.  Shoot the bad guy targets, try to avoid shooting innocents.  If you don’t make too many mistakes, you can score extra Continues.  There’s three Bonus segments in this game, so you can get enough extra tries to make it through the end of the game.

Policemen in this department are subjected to hours of training to tell the difference between Big Boy and the milkman.

There’s also an on the rails shooting segment involving cars, which isn’t bad I guess.  Jumping over bullets coming from the left and right takes a bit of skill to pull off, and if you time your shots correctly, you can kill cars on the edge of the screen before they have a chance to fire on you.  The problem is, this exact same level is repeated several times with no changes whatsoever that I could see, which is when I started to notice that this game was clearly recycling content in order to water down its length.

These stages aren’t too bad I guess.

I lost count of how many levels were exactly like this.

The game continues, recycling levels over and over.  Eventually you fight Flat Top and it’s extremely difficult because he guns you down really quickly.  I honestly can’t give you any advice on how to beat him, I just kept retrying until I got lucky.

I have no explanation for why I won on this attempt other than I just happened to not die.

So, I didn’t really hate this game for the most part, I just was mostly bored and hoping it would end soon.  Then I hit level 6-1 and the game went full-blown Dr. Jekyll and Mr. Hyde on me. As soon as you see this screen, you’re in for a world of hurt.

Like level 2, you suddenly can’t use your gun, except now there’s incredibly precise platforming, and enemies will constantly spawn from the sides of the screen and push you into a pit.  Any chances of this game getting away with a “not bad, but not good” review from me completely went out the window.  Now, I really hate this game.  I’m just lucky I was able to get enough extra continues from the Bonus segments to try the level enough times to hope the game would randomly give me enough windows of enemies not spawning to make it over the pits.

Hey, what do you know? This game is terrible after all.

It’s hard to tell by just watching, but since you have to push Up to stand up again, you can get stuck on this ladder and stunlocked by damage from the molotov cocktails.

Eventually I got to the last level, which is a recreation of the drawbridge scene from the climax of the film, where Dick Tracy faces off against Big Boy.  At this point, I was so numb from this game that I just constantly threw myself at Big Boy over and over until I got lucky and his gear attack didn’t hit me for some reason, and beat the game.

So, that was Dick Tracy for the Sega Master System.  What did I learn?  I didn’t feel like I learned anything.  I didn’t even learn how to play Dick Tracy very well, all I did was sort of keep dying until the game’s randomness lined up in such a way I could get through.  I learned that this game was a lot more enjoyable sitting on my shelf than being in the Sega Master System, that’s for sure.

I think there’s something interesting about mixing a platformer and a shooting gallery game, though the execution here is awful.  If you’re a game developer, maybe experiment with that concept and see if there’s anything there.

Perhaps someday we’ll finally get a good Dick Tracy game.  A good Dick Tracy game is certainly possible in theory, with the colorful visual design, detective work, gunplay and driving, but I’m not going to hold my breath in hopes that someday a competent studio will try to tackle the project.  Rockstar Games could make an awesome Dick Tracy game, but I feel like they would arrive at the conclusion that they would be better off just creating their own characters and just making an original game instead.

According to a few statements from Warren Beatty here and there, there might be another Dick Tracy movie eventually.  He still owns the rights to it, so it’s certainly possible.  That’s probably the only scenario I could see another Dick Tracy game being made.

There’s still some Dick Tracy games remaining that I haven’t tried, so I’m going to keep looking into them and hopefully find a good one.  As for this version, I can’t recommend it to anyone.  Even if you happen to be a game reviewer and you’re looking for bad games to make fun of, this is still a bad candidate because it’s just too boring to joke about.  As a Dick Tracy fan, I’m in this game’s narrow audience and I still didn’t get much out of it.

On the upside though, the game’s box art looks great. I’ll just keep it on the shelf from now on.