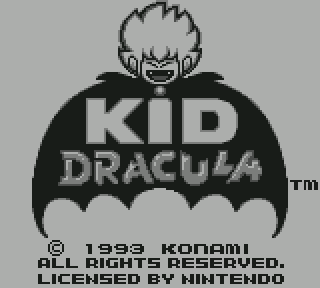 Kid Dracula is an amazing Game Boy game that few people seem to remember. It’s a sequel to Boku Dracula-Kun (The first Kid Dracula on Famicom). It’s actually a parody of the Castlevania series, and is chock full of fun references to the franchise.

The character you play is Kid Dracula, son of Dracula. There’s nothing officially in the canon to support this, but I think he’s Alucard, based on the hair color, relationship to Dracula, and his special moves:

I rest my case.

Check out that Goku haircut! I also like his shit eating grin whenever you defeat a stage.  It’s definitely my favorite part of the game.

Look at this smug little bastard.

This is very much a trial and error game.  Very often you’ll be thrown into some incredibly tough predicaments that are too fast to beat purely on reaction, and you’ll have to use a bit of planning and memorization to eventually get through.  Checkpoints are fairly frequent, though if you lose all your lives you have to restart the stage.  I find this game’s difficulty to be tuned just right, very challenging but not absurd.

One of the most enjoyable aspects is spotting all the references to Castlevania and other Konami properties throughout. I really wish more companies made parody games like this, it’s so much fun.

The game has a generous amount of bosses with great designs. There’s even a Jason Vorhees fight!  The game will constantly surprise you with additional boss forms after you kill them.  Here’s a tip: don’t ever assume a boss in Kid Dracula is dead until the level actually ends.

Because Kid Dracula has so many different offensive and defensive abilities, there’s many different ways to beat each boss.  Even if you’re stumped by a particular boss, there’s plenty of different strategies you can try.

Turns out Jason is pretty fun to fight when he’s in a game that isn’t a glitchy, broken mess.

The game has a very whimsical and cute art style. Gameboy games are notorious for having crummy, unskippable cutscenes but the ones in Kid Dracula are quite charming. Between getting new abilities at the end of every stage, minigames and the fun cutscenes, beating levels in this game is quite rewarding.

The cutscenes are adorable.

You spend coins you find during levels on minigames which give out 1-ups as a reward.  With the exception of the ones that are purely based on chance, the minigames are a lot of fun.  It’s a bummer you can’t play these games in a separate mode on the cartridge.

My favorite is the Rock Paper Scissors game where you have to either defend yourself if you lose the throw or bonk the enemy before he can defend if you win the throw.  It’s quite a simple and brilliant idea.

If you master these minigames, you can score a lot of 1-ups to help you complete the game

The game does feel sluggish at times due to the Gameboy’s limitations, but the designers were aware of it and finely tuned the game around it.  The game feels very solid and nice.

The game’s strongest feature is Kid Dracula’s many different moves, which you’ll use constantly because of how powerful they are. Unfortunately, the Gameboy doesn’t have a lot of buttons, so you have to cycle through these abilities with the Select button and activate them by doing a charge attack with the B button.  I would have preferred it to be like Batman on the NES where you can select your attack and use it by tapping B, but this isn’t a bad control scheme. One nice compromise is you can select attacks when the game is paused, which I’m grateful for.

The bad guy in this series is a pudgy dinosaur called Galamoth, who shows up sometimes in other Castlevania games, such as Symphony of the Night, as a nod to this series. He’s the baby, gotta love him.

As far as Gameboy platformers go, it rarely gets any better than this game. It’s a hard game to find, but I would consider it a must-have for the system. Castlevania fans should definitely check it out.

I’d really like to see the Kid Dracula franchise make a return someday. A cutesy Castlevania game is such a great idea, and there’s lots that can be done with the concept.