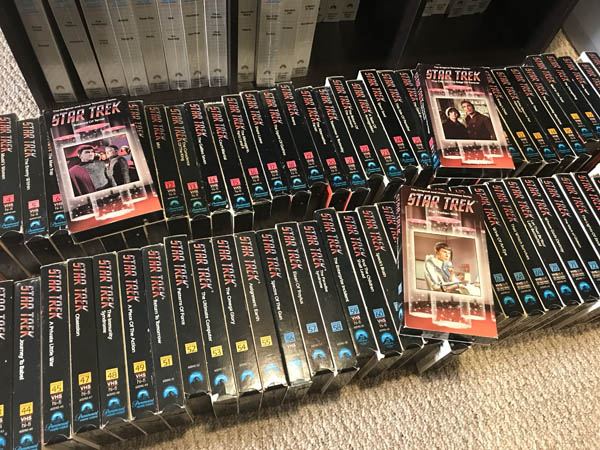 In 2006, a Remastered version of Star Trek: The Original Series was attempted. Beyond simply moving the show into an HD screen format, every special effect shot in the series was replaced with computer generated ones. Now, if you try to watch this series on Netflix, these “modernized” versions are the only things being offered.

When the Star Wars Special Editions were being teased before their release, I have to admit I was somewhat into the idea. Something like that had never really been attempted before. Who knew, maybe if it was executed artfully it could be great? I was willing to at least give it a chance.  But sure enough, sitting in the theater and watching all these classic scenes with weird rubbery, shiny CGI monsters pasted over the film footage it became clear pretty quickly that these kinds of remasters just aren’t a good idea. A Jim Henson Muppet looks more like a living creature than this.

But, I’ve been curious about whether it’s the execution of these remasters that make them bad, or if doing special-effects remasters is even worth attempting in the first place? After a lot of thought, I want to make the case for the latter.

My gut reaction on watching the Remastered version of Star Trek: TOS was I had an intense desire to turn it off and watch the originals.  But why? Why am I so much more interested in the original special effects instead of these new ones?

I’m not going to pretend like there’s not some aspect of psychological bias to this. We do have a tendency to like the versions of things we’ve seen first. You’ve likely heard cover versions of your favorite songs that you absolutely didn’t like, or read a book that got adapted into a movie you didn’t like. But does this always happen? There are good cover songs and there are good book adaptations. It can’t just be the case that our brains just latch onto the first thing we see and that’s the only version we’ll find acceptable. There has to be more to this than that.

There’s a lot to unpack here, so let’s go point by point:

There’s not one singular goal that all artists should strive towards.  If depicting reality with as much precision as possible was the only goal of every artist, then we wouldn’t have animation or abstract art.  Likewise, we can’t just have everything be stylized either, because realism has weight and grandeur that draws from the existing beauty of nature. Both are worthwhile goals, and we want to have a world that has many different types of art in it.

Star Trek: TOS’s special effects were originally designed with many goals, but hyper-realism wasn’t one of them. I’d like to think the special effects designers wanted to make things visually interesting and give these space-adventure scripts that were being written for the show the chance to come alive. Of course, they wanted to stay under-budget as well, but I’m not entirely sure they would have gone for as much realism as possible even if they had more money to do so.

If you take in everything visual about TOS besides the special effects, it’s very clearly a show that is intended to be stylized. Look at the set and costume designs, look at the color schemes and abstract lighting used.  The realism came from the stories and the performances, but the show was supposed to be colorful and almost dreamlike.  Later Star Trek series aimed to be visually realistic but TOS was after something different.  This is a stylized show, and it’s not intended to be realistic looking. Attempting to enhance the realism of TOS’s special effects goes against what the show was trying to do visually, and that’s why the Remastered version sucks all the beauty and fun out of each frame.

The opening theme song to the Remastered version is the moment when people like me who don’t like this version instantly start to get turned off.

It seems at first that they did their best job. The new theme song is competently recorded and performed well by a live orchestra, but why does it sound terrible? It’s because as soon as the theme song ends, the normal episode’s audio comes in and there’s a drastic difference between the nature of the sound between the two. To be incredibly non-technical about this, the original audio has a “grain” to it that the new recording doesn’t have, and the difference between the two is very jarring and impossible to miss.

This new recording doesn’t sound like it came from the 60s, and even someone who didn’t grow up in the 60s can recognize this fact. And the big kicker is, if they had put a filter over the new audio to clear up the inconsistency, then they might as well have just kept the original! It’s such a waste of everyone’s time and money. The same thing applies to the special effects. No matter how much effort they put into making an establishing shot of the Enterprise orbiting a planet look beautiful and polished, we’re still going to cut to the bridge and see the 60s set design and 60s costume design filmed with cameras from the 60s.  The juxtaposition of the two is off-putting and doesn’t blend together well.  And the solution to this problem leads back to the same problem with the theme song, trying to build CGI scenes that look like they’re from the 60s will just lead right back to the easier solution of just keeping the footage unaltered.

Now, there are some arguments that could be made for a remastered version like adding more variety to the planets that the Enterprise visits or composing more action-packed space battles, but that leads me to my next point…

Star Trek: TOS is a product of the 60s.  It was being influenced by, and was influencing the culture of its time. There’s always going to be a historical context to what you’re watching even if you’re completely uninterested in the history of the 1960s, because this show will have a strange quality to it that is very different from the type of shows that are being produced today. I’ve spent much of my adult life in the pursuit of historical pop-culture preservation along with James, so of course I would have this opinion. But I really do think that not only is it important for history to be preserved in instances like Star Trek, the old special effects are more interesting.

It’s interesting to see what was possible with visual effects in earlier generations. Sometimes we are amused by how crappy old style monsters and laser effects looked back in the day.  But when you see a special effect from an old movie that looks amazing and still holds up by today’s standards? That’s a special kind of emotion that is exclusive to watching old things.

Also, old things are cool. Show me a group of teenagers here in 2017 and I guarantee you at least one of them is into music, movies, video games or fashion from the 80s or 90s, or even things that are older. It’s not just nostalgia, and you don’t have to live through an era to be fascinated by it.

Overwriting old special effects with newer ones robs the viewer of the unique viewing experience they get watching such an old show.

I’ve seen the original model for the Enterprise at the Smithsonian Air and Space Museum. It’s an absolutely beautiful piece of craftsmanship and an amazing sight to see in real life. I actually stood and looked at it for over an hour inspecting it from every angle. As I was looking at it, the thought in my head was “I am looking at what is probably the single greatest object on the face of the planet”. I can understand perhaps preferring a well animated CGI dinosaur to an animatronic robot one. But a spaceship? What can you possibly do with a spaceship that can’t be accomplished just as well with a model, unless it’s some kind of bizarre alien spaceship made out of flesh or goo or energy?

CGI photorealism has the same goal as filming a practical model. You’re trying to simulate a fantasy object, so you want to create a model that has a sufficient amount of detail and use materials that catch light in the correct way.  Real spaceships have sort of a sterile, plastic look to them, so making models out of plastic or smooth painted wood gets the exact look you’re going for. That’s why the special effects in 2001: A Space Odyssey hold up so well.  It’s definitely the case that filming a real model, if done well enough, will look identical or very close to putting an actual spaceship into space and filming it flying around.  That’s why The Orville built a model of their show’s main ship and filmed practical effects flybys with it, even in 2017 where CGI is the industry standard. The model is always going to look superior.

Practical effects vs CGI effects are like two different genres to me. One is better than the other depending on the task.  CGI definitely beats out practical effects if you wanted to make a swarm of alien bugs, but if you want to explode a building, a CGI explosion is not going to look as good as blowing up a practical model, at least with today’s technology.  Each one still has an application where it shines over the other.

I don’t want to be too mean to the Remastered special effects team. They did do a pretty good job considering it was 2006, and parts of the Enterprise model, especially the nacelles, look good.  But the original model looks more like a real object and the Remastered version definitely looks like the fake CGI thing that it is.

Now, the Botany Bay in the episode Space Seed with its blurry textures looks straight out of an N64 game.  In no way can it can be considered to be even close to being as good as the original, and in no way better.  There are plenty of other examples of the Remaster just being absolutely hideous, but I don’t want to be too cruel after I’ve spent all this time criticizing it in this post. It’s like I’m looking at a screenshot of Wing Commander 3 (Now available for Windows 95 and MS-DOS).

I believe the Remastered version of TOS was made with good intentions.  You can certainly see why the idea was pitched and why the plan went forward.  I think, like the Star Wars Special Editions, we needed to see this experiment tried before we could see why it’s not a good idea.

Unfortunately, Remastered only version of TOS you can watch on Netflix at the time of this writing. It’s time to put this failed experiment behind us and revert the official version back to the original, which the cast and crew got right the first time.