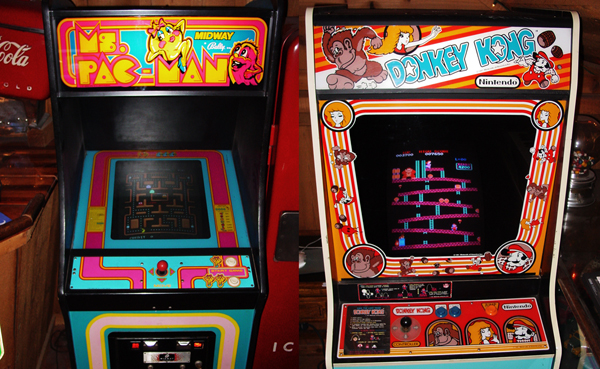 One of the main things that got me into gaming and drawing at a young age was all the beautiful art made for arcade cabinets from the golden era of gaming.

I was born in October of 1980, the same year Pac-Man was released. I always found it perfect that Pac-man came out in 1980 because that’s right at the start of the 80s. Which makes him the perfect mascot for the decade.

Anyhow, I have vivid memories being in my local roller rink somewhere between 83’ or 84’ and seeing the arcade scene for the first time. They had a lot of games at that rink but the ones that made an impression on me most were Pac-Land and Super Pac-Man.

The cabinets had giant vibrant cartoon characters that looked like something out of a 1930’s Disney cartoon. At that age I was watching a lot of Mickey Mouse and Donald Duck shorts on the Disney channel, so seeing this style character in front of my face on a giant machine really made me ecstatic! I was lucky enough to visit the arcades fairly often back then and I have vivid memories playing so many of the early classic games. I fell deeper into love with gaming once I started playing NES, but the arcades were where it began. I only wish arcades like that were still around locally. Fortunately, at the time I’m writing this, there are still some places left that maintain the same spirit and atmosphere. The best of those being FunSpot in New Hampshire. Though it doesn’t have every single game from the golden era, it has most of them. And almost all of the machines are functional and kept in beautiful condition. It’s practically a museum (yet still an arcade) and one of my favorite places to visit. Last time I was there I spent hours playing Mr. Do! which very well might be my favorite early 80s arcade game. The cabinet isn’t my absolute favorite, but I’m obsessed with the game for some reason.

On that note, I would like to talk about which machines I think have some of the absolute best cabinet art. A few that spring immediately into my mind are Food Fight, Wizard of Wor, Satan’s Hollow and Centipede. All of them have killer side-art and marquees. Food Fight especially, because I’ve always had a thing for cartoon food growing up in the Tom & Jerry cartoons. Another place I used to play arcade games back in the day was on the Staten Island Ferry. I guess they wanted to give something to occupy kids back then from being little brats (such as myself, cough). I remember playing the original 4-Player Gauntlet machine and thinking it was incredible. The way it had four different characters with four joysticks was something I had never seen before. The art of each character on the side was like something right out of The Hobbit, and at that age I was a huge fan of the Rankin Bass animated cartoon. I have a lot of things I’m nostalgic for. Old cartoons, old toys, retired Disney attractions, vintage Schwinn bicyles.. to name a few. But I can’t think of anything I have more nostalgia for than being able to walk into an early 80s arcade. The experience was magical. The more I think about it, the more sad I get that console and PC gaming totally killed it. Sure, there’s a few standout places you can go to relieve the experience (Galloping Ghost is another one), but it’s not quite the same as being able to go there in your own home town at your leisure. Because back then, it wasn’t some one-off place you might get to visit if you’re lucky. It was part of everyday life, the same way playing on Steam is now for anyone with a PC. Arcades have been forgotten. Games like Centipede are no longer a viable property. It’s depressing.

Just recently I watched the second season of Stranger Things, which shows the young cast playing in their local arcade (because the show takes place in the early 80s). I thought they did a good job capturing the look and feel of what it was like. How Dustin got pissed off and cursed at the game to how they had the dorky employee that fixed the machines in his room in the back. It made me really miss those days, a great time that may never come again.

But there is a light at the end of the tunnel, it seems. For those of us that are old enough to remember that time, there are at least Barcades that have been popping up all over the place. It seems that combining arcade machines with alcohol is a winning combination. Since it gives people something to do at the bar and the establishment can make enough profit to survive. That said, whenever I go to a barcade I never even drink! I’m too distracted by the games!

And it was at a barcade that I discovered one of my favorites that I somehow never even knew existed as a kid. Satan’s Hollow. It’s a beautiful machine with a giant devil marquee and a red throttle controller, sort of like the one the Tron arcade game had. This game has everything you could want. Excellent addictive gameplay, a unique control scheme that works well and one of the most badass cabinets that exists. If Iron Maiden had their own arcade game it would probably look something like this.

Another one I’m really nostalgic for involved a group of pigs. But what was it called!? For many many years I had no idea what the title to the game was. I played it once at my local mall when I was about ten years old and then they got rid of the game. And eventually the arcade shut down. This left me wondering what it was for a very long time. And I barely remembered anything about the gameplay. It was moreso remembering what the machine looked like. Giant. Blue. And covered in vibrant pink pigs! For years I thought about the game and romanticized about what playing it was like. Finally, years later thanks to the internet I finally found out what it was. PIG OUT! Another beautiful multiplayer cabinet (like Gauntlet) with killer side-art. (Or I guess Super Off-Road is a better comparison since it’s 3-Player only) While the game may not have been regarded well – in my mind it was a classic! I used to draw pictures of what I thought I remembered the cabinet looking like in my school notebooks when I should have been studying! These days, everything can be looked up through search engines in an instant. If I had the ability to do that back then, this game would never have been special to me whatsoever. I would have looked up a picture and that would be that. Instead, because I didn’t have any idea what it was for years I was kept in suspense. When I finally found out – it was exhilarating! Now that I can see what it actually looked like, I have to say it WAS a cool looking machine and I can see why it left an impression on me!

Another one of my favorite early 80s arcade games was Centipede.

I’m a fan of the trackball games in general and Centipede is one of the best. (Another great one for two-player co-op is Marble Madness) You control some little object, though I’m not even sure what it is. I guess if you’re killing a Centipede maybe it’s bug spray or something. Kind of like in Donkey Kong 3, but I’m not sure.

Anyway, you move around with the trackball obliterating mushrooms as fast as you can while also avoiding spiders and taking out the pieces of the centipede as it gets lower. Its one of the most intense games ever, requires fast decision making and it’s highly addictive. It also happens to have one of the nicest cabinets ever. They had some really good artists working back in those days. I have to wonder how many of the artists that did arcade side-art also had careers in comics and animation because I’m sure with that level of talent there had to be some overlap. For anyone that’s interested in old arcade art, a pretty cool book recently came out called “Artcade” which compiles photos for many retro arcade marquee headers. It doesn’t include EVERY old marquee, I noticed some like Jr. Pac-man and Nibbler aren’t in there. So i’m hoping they do a follow up book at some point down the line. A side-art book would also be nice..

Anyway, I’m starting to realize I have a lot to say about arcade games and old arcade art in general so I’m going to stop here for now. I will most likely continue on with this subject. If you enjoyed this and want to hear more arcade memories let me know in the comment section!