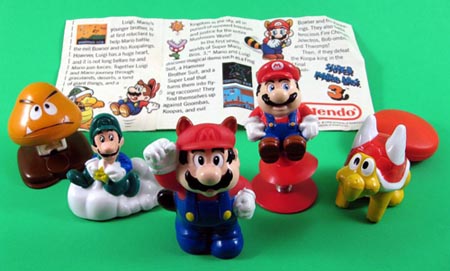 As you can tell by this blog already, nostalgia is largely my identity. And one part of that is my love of everything that is vintage McDonalds.

One thing not a lot of people seem to remember much are McDonalds Gift Certificates for kids. This is the only image I could find online of them. It’s a Halloween themed one, but they had booklets for the entire year. If anyone is able to find any images of more of these I’d love to see them. Basically, the idea was that adults could give these out to kids so that they could get something to eat on their own. I believe the first time I ever ordered food at a restaurant by myself was with using one of these certificates. These ones are from 1976 but the ones I would have had were probably from around 1987. Another thing I remember loving were the McDonaldland Cookies. Obviously, they were really appealing to look at because the boxes were colorful and had all the characters on them like Grimace, Birdie, the Fy Guys and the Hamburglar. These boxes had the regular cookies in them, which were pretty good. It also made me think McDonaldland might be connected to Oz because they are walking on a yellow brick road. I wonder if that was intentional.

Those cookies were for the kiddies. The ADULT cookies were the “Chocolaty Chip” Cookies.  I remember these tasting better by far. It was always a hard decision which I should get. I wanted the character boxes, because I needed to get a complete set. But I knew the Chocolaty Chip cookies tasted better. What a dilemma! My sister always went with the Chocolatys and I would usually get the character box. I’m such a sucker for cartoon merchandising, it’s quite sad. Those of you who are old enough to remember know that McDonalds used to have all their food in styrofoam containers. I think it was sometime in the 90s when McDonalds started to become more conscious of the environment. They started installing recycling bins and began phasing out those evil styrofoam boxes. I know it’s bad for the environment, but the food tasted better in styrofoam, sorry. That said, I am glad to give it up if it’s good for the environment. The styrofoam isn’t biodegradable and its hard to recycle so it really isn’t a good idea at all. Strangely, it seems that McDonalds actually recently brought back the foam cups. The evil devil on my shoulder is happy about this because the food is much tastier when served this way, but the good angel on my shoulder says it’s better to get rid of them for good.

Another thing that made the styrofoam better besides the taste was the shape of the containers. With the McNuggets there used to be a special slot in the tray to put your sauce of choice for dipping. Sure, you can always dip it directly into the sauce container, but you haven’t lived until you’ve tried it this way! Especially good for storing honey, which I believe only comes in packets. Another thing that’s long gone, or should I say updated, are the McDonalds playgrounds. Sure you can still find ballpits at modern McDonalds sometimes, but you haven’t lived until you’ve been nearly trapped inside a Big Mac® death cell. I was never really scare of clowns. I know thats a big trend now, but even as a kid watching Steven Kings IT on television, clowns were just not scary to me. Ronald McDonald was probably creepier to me than the clown from it, but no clowns scared me. What DID scare me was being trapped inside the Big Mac climb-in jail cell. It didn’t scare me at first, from the outside I thought it looked cool. But after I went into it, I just wanted to get out. Remember, this thing was outside and had to contend with whatever weather conditions were going on that day. When I went in it, the metal bars were freezing cold, pressed up against your arms, it was anything but fun. Not only that, it was shaped like a circle, and it made it very awkward to move around. There was very little space to maneuver yourself. It was the opposite of fun, it was a nightmare. In 1985 I had my fifth birthday party at McDonalds with my family and friends. At that point in time, it was my favorite place to eat. (Long before I grew out of eating fast food.) It’s funny, the way I remember birthdays as a kid largely revolves around what present I got. What a brat! The year prior in 1984 I got Snake Mountain from Masters of the Universe. But it was here at McDonalds that I got what had to be my favorite playset of all time… Cat’s Lair from Thundercats! The other thing I remember vividly from the party was that after an intense game of “ringtoss” I was led over near the front window where they had a giant talking tree. I sat by the tree and this creepy voice came out and made me very uncomfortable. Even at that age, I knew it wasn’t actually the tree talking to me. I was more creeped out by the fact that I didn’t know who the person was that I was talking to. Some random employee on a speaker phone telling me knock knock jokes is enough to make anyone uncomfortable. I can’t do a blog about McDonalds and not mention Happy Meals. First and foremost I guess I need to mention the Super Mario Bros Happy Meal set. It came out in 1990, the same year as the game itself. Super Mario Bros 3 was the biggest release of a video game I can remember at that point in time. There was advertising for it everywhere. I especially remember the commercial for it where everyone on earth formed an image of Mario’s face. Mario ruled the world, and our Happy Meals. I remember playing with the Racoon Mario spring activated toy the most out of these. The suction worked fairly well and Mario would pop up and fly through the air. The Luigi toy just moved around like a little wind up car. The Goomba just popped up, probably the worst of the bunch. And the Paratroopa had an air powered hose that made his legs move so he could bounce around a tabletop. This really makes me wish they did a Legend of Zelda line of Happy Meal figures back then but it never happened. Another one of the best toys McDonalds ever did were Changeables. Basically fast food versions of Transformers. Every kid needs to own an Egg McMuffin Robot, don’t you think? Another thing I’ve always had a fondness for is vintage promotional glasses. And McDonalds was a primary source for these collectables. They had a whole line of McDonaldland character glasses with Ronald, Grimace and the whole gang. But they also did other glasses like Garfield and other licensed characters. Now this is a subject I’m sure I will eventually come back to because I collect these kinds of glasses so more on that subject later if anyone is interested. One of McDonald’s strangest but memorable promotional stunts happened in 1988. They started a contest that took “flexi-disc” vinyl records, stuck them into newspapers and released the $1,000,000 Menu Song. Each record contained a recording of a pretty lousy chorus attempting to sing its way through the entire menu. If the singers on YOUR record could make it all the way through the song without screwing up, the disc was a winner!

As a kid, I didn’t understand the rules and I thought that I was supposed to sing the song, record myself doing it and send them a copy of my recording! I have to wonder if buried somewhere deep within the depths of the McDonalds archives is a cassette tape of an eight year old Mike Matei awkwardly belting out his best “Big Mac, Mc DLT, a Quarter-Pounder with some cheese…”