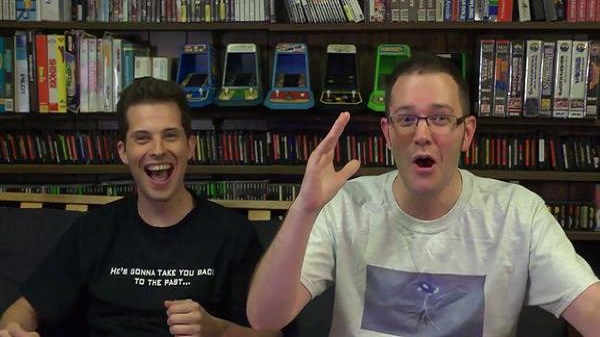 There are certain questions I get asked all the time and one of the most frequently asked is “How did you first meet James”. I’ve told this story before, but if you still don’t know, here it is!

James Rolfe and I went to the same college. He got a degree in Film and I got a degree in Animation. We never had any classes together, we met outside of class at a party I was having at my apartment at the time.

There was a night where we had a bunch of friends over and ended up playing a drinking game with a deck of cards, as is typical when you’re in college.

We had played several rounds of the game, and then I got a knock on my door. It was James with a friend of his who knew someone else at the party. With the game we were playing, the idea was every time you lost you had to take a swig of beer. Well, unfortunately James had a few too many! A bit later on in the evening, James started to feel sick and said he might throw up. He go up to go to the bathroom, but I could tell he wasn’t going to make it. I handed him a vintage metal Pac-man trash can for him to use, but he missed and threw up all over my arms. He then proceeded to the bathroom and shortly after, went home. That was that, or so I thought.

The next morning I got a knock on my door, and there was James. He apologized for what had happened and told me that he forgot his hat. We went into my bedroom where I had brought his hat and he saw that I had some old Transformers toys. We got into a discussion about G1 Transformers figures and nostalgic things from the 80s and have been doing the same thing ever since.

I talked about this with James a few times over the years and the day we met was also the same day he met Ozzy Osbourne. This was October 20th, 2001 (which also happens to be Bela Lugosi’s birthday).

You know what they say, nothing brings two people together like hot vomit..we’ve worked together ever since! 😀 28 thoughts on “How did James Rolfe and Mike Matei Meet?”