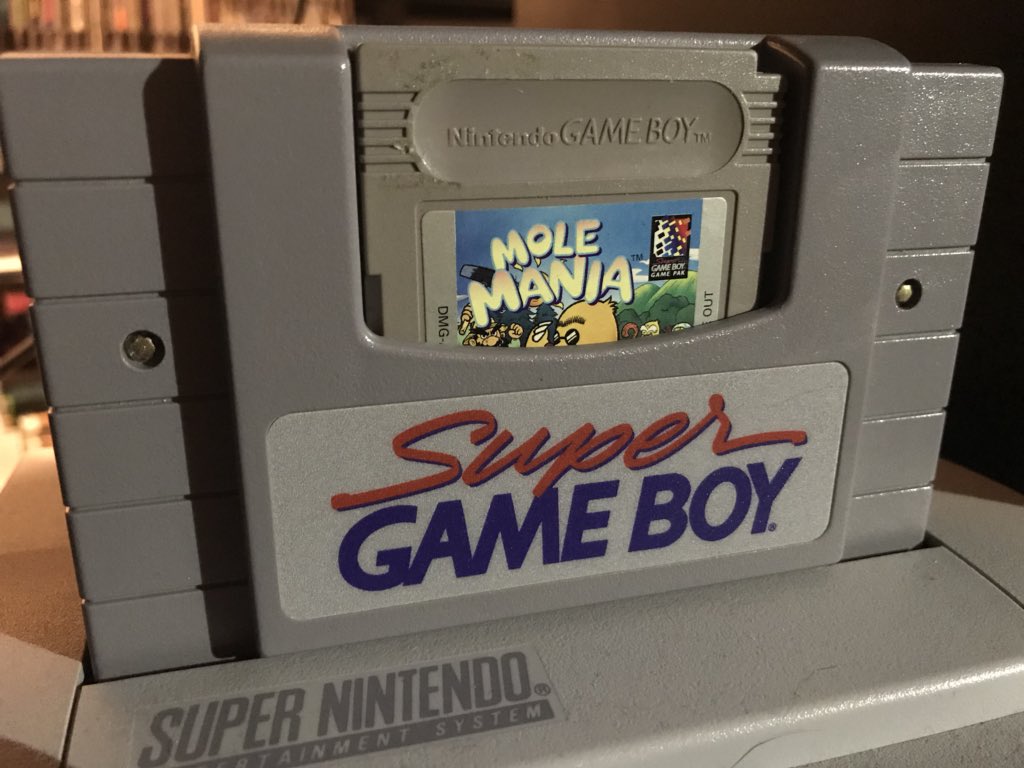 Mole Mania was developed for the original Game Boy. Typically when I play Game Boy I tend to use the Super Game Boy. If you’re not familiar with that, it’s a device which fits into the top of the Super Nintendo that allows you to play Game Boy Games on a console. To this day, I’ve always been more of a console gamer than a handheld gamer. I very rarely even take my Nintendo Switch out of the house. And it’s the same thing with the Game Boy, I prefer playing on the TV screen.

There was a brief period in which Game Boy games included enhancements that would be activated when played via the Super Game Boy, such as enhanced color palettes and custom border artwork. This ended with the release of the Game Boy Color, but we got a couple cool Super Game Boy enhanced games before then, and Mole Mania was one of them.

You play as Muddy Mole, whose family has been kidnapped by an evil farmer named Jinbe.  Jinbe’s a bit of a narcissist, he owns “Jinbe Land” and has statues of himself everywhere.  I’m willing to bet the story was influenced by the classic children’s story Peter Rabbit, where the pest is the hero and the farmer is the bad guy instead of the other way around. You’d think one statue, maybe two, would be enough for this guy.

It’s easy to get emotionally invested in this cute story of a cartoon mole rescuing his family.

Mole Mania is a top down puzzle-adventure game, where the goal is to use a big black ball to break the exit of the screen to get to the next one.  The main thing that sets Mole Mania apart from games of this genre is the fact that Muddy can dig underground to reveal a new plane of each level, which gives a 3d aspect to the game despite the graphics being 2d.  Good Game Boy games always broke out of the limitations of the hardware with clever ideas like this.  The underground adds complexity to the puzzles and gives Muddy a way to evade his enemies (he can poke his nose out of the ground to quickly check if it’s safe to come back to the surface), but it also adds an additional challenge in that the holes he leaves behind entering and leaving the underground can screw up his ability to complete puzzles.  If you put a hole in the wrong spot, you’ll have to reset the screen and try again.

The digging mechanic is the unique, defining feature of this game.

The bonus round minigames can be quite challenging and fun.

How games should be doing tutorials is a big discussion point for games nowadays, and I think the way Mole Mania teaches the player is one really good way to do it. Although the game does eventually become challenging, the difficulty ramp is very slight and the game introduces you to new mechanics one at a time.  Along the way you can read signs that explain everything in the game, and these are totally optional so, if you’re playing through a second time or you’d just rather figure out things by yourself, you can skip them.

Mole Mania is a pretty complex game that requires a bit more explanation than most, and they did an excellent job of teaching the player without making it frustrating.

Each level ends with a very charming and cleverly designed boss fight.

Here’s a sample of the wonderful music.

This game was developed by none other than Shigeru Miyamoto himself.  If you’re a fan of his games (and you most likely are), and if you like puzzle-adventure games, you’ll really enjoy Mole Mania.