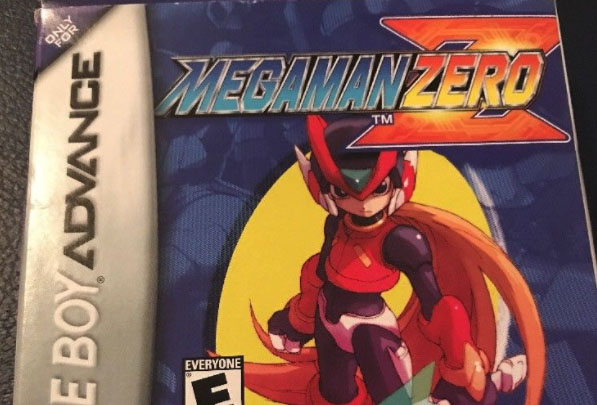 Mega Man Zero was made in 2002 by a then-fledgling Inti-Creates, a Japanese development studio that went on to make a lot of great games.  In this game, are you playing as Mega Man, or Zero?  Is he a combination of both?  The answer will probably not surprise you, but it’s a spoiler and you’ll have to play the game to find out.

This game is a side-scrolling action platformer with pseudo-rpg elements.  It’s a challenging game, though the difficulty is offset by the Cyber Elf system, which are one time use only collectible items which can do things like heal you or remove all the spikes in a stage.

I’m about as mixed as I can be on this game.  I have complaints, but it’s impossible to ignore the games many strengths.  There’s just way too much awesome stuff in this game to call it bad.  To be perfectly honest though, a lot of my complaints probably won’t bother a lot of people.  It’s definitely worth trying out.

The game has an open ended map you can explore… sort of.  Areas are blocked off by Reploid guards and eventually get removed as you accept and clear missions.  It’s strange that they went with this type of design, I would have preferred all these progress-blockers to not exist and let me go where I want to.

This game has a lot of text dialog, much more than I care for.  I don’t mind some reading in games if the story is well-written but that’s definitely not the case here.  This is some very bland, dry material, so I found myself skimming through the dialog and mashing the button a lot.  Turns out there’s an old man in this game who punishes you for skipping through a boring story he’s telling you and you can permanently miss a secret that he gives you.  Hard to say if the game is poking fun at itself or actually trying to teach me a lesson.

Good controls or bad? It depends.

Mega Man Zero’s controls really depend on what you’re playing it on.  Specifically, you need a handheld or controller setup where the L and R buttons are comfortable to use, because you’re going to be using both of them constantly.  If you’ve got that, then this game is going feel great.  If not, you’re in for some serious hand cramping after combining multiple buttons for dashing jumps over and over.

If you push the Dash button, the player dashes.  However, you can also dash by double tapping left or right.  This is a good compromise because of the uncomfortable shoulder buttons of just about all Game Boy Advance variants, but there really should be an option to disable the double tap dash if you don’t need it.  You can accidentally dash when you don’t want to, and this could have been very easily fixed with a simple option.  Later games in this series added this option, but it took until Mega Man Zero 4 until it happened.

My favorite part of this game is the fact that you can have two attacks equipped at the same time, a Sub Weapon and a Main Weapon.  You can set up the character the way you want to, with a projectile attack on one hand and a laser sword on the other.  This “gimmick” of Mega Man Zero is the ultimate justification for its existence (besides the unbelievably good graphics), and it expands upon classic Mega Man gameplay in a very strategic and fun way.

I feel really bad complaining about the game’s big, gorgeous character sprites, but this results in a smaller playing area.  The whole game feels very “zoomed-in” and there’s far too many leaps of faith in the platforming.  However, none of this really hampers the combat, especially the boss battles.  I think if this game would have discarded a lot of the platforming and instead focused more on combat, the viewing area of the screen wouldn’t have been an issue.

I think blaming the Game Boy Advance’s screen resolution (240×160) for this problem is a bit of a cop out. The original Game Boy was even smaller (160×144), and there are many Game Boy games where the viewing area feels generous.  The sprites, most importantly the player sprite, need to be sized such that the viewing area feels adequate.  However, games on small screens with big sprites are possible, but the game design needs to be built around it.  Games that approach it this way end up feeling “cozy”.  There’s different ways to solve the problem, but Mega Man Zero wasn’t able to strike the kind of balance I’m talking about. It really does feel like you’re playing a 2d platformer through binoculars.

The incredibly fun, challenging and beautiful boss fights are far and away the best part of this game.

It dawned on me how lame it was going to be to slowly escort this guy all the way back to the start of the level.

The Triple Rod can attack in all directions, and is very fun to use.

Expect to get absolutely slaughtered by bosses your first time fighting them.  I clearly had no idea what I was getting myself into here.

The interesting thing about this game’s flaws is none of it comes from the development team’s lack of effort. This game is incredibly polished and was very clearly a product of a lot of hard work.  I mean, the fact that every enemy has two death animations, one for being blown up with the gun and one where they’re sliced in half from being hit with a laser sword absolutely blows me away.  The shortcomings of this game just come from a lot of really strange design decisions that hold it back from being the true classic it should have been.

But hey, I still have more of these games to play, so we’ll see if the Mega Man Zero series improved with later installments.