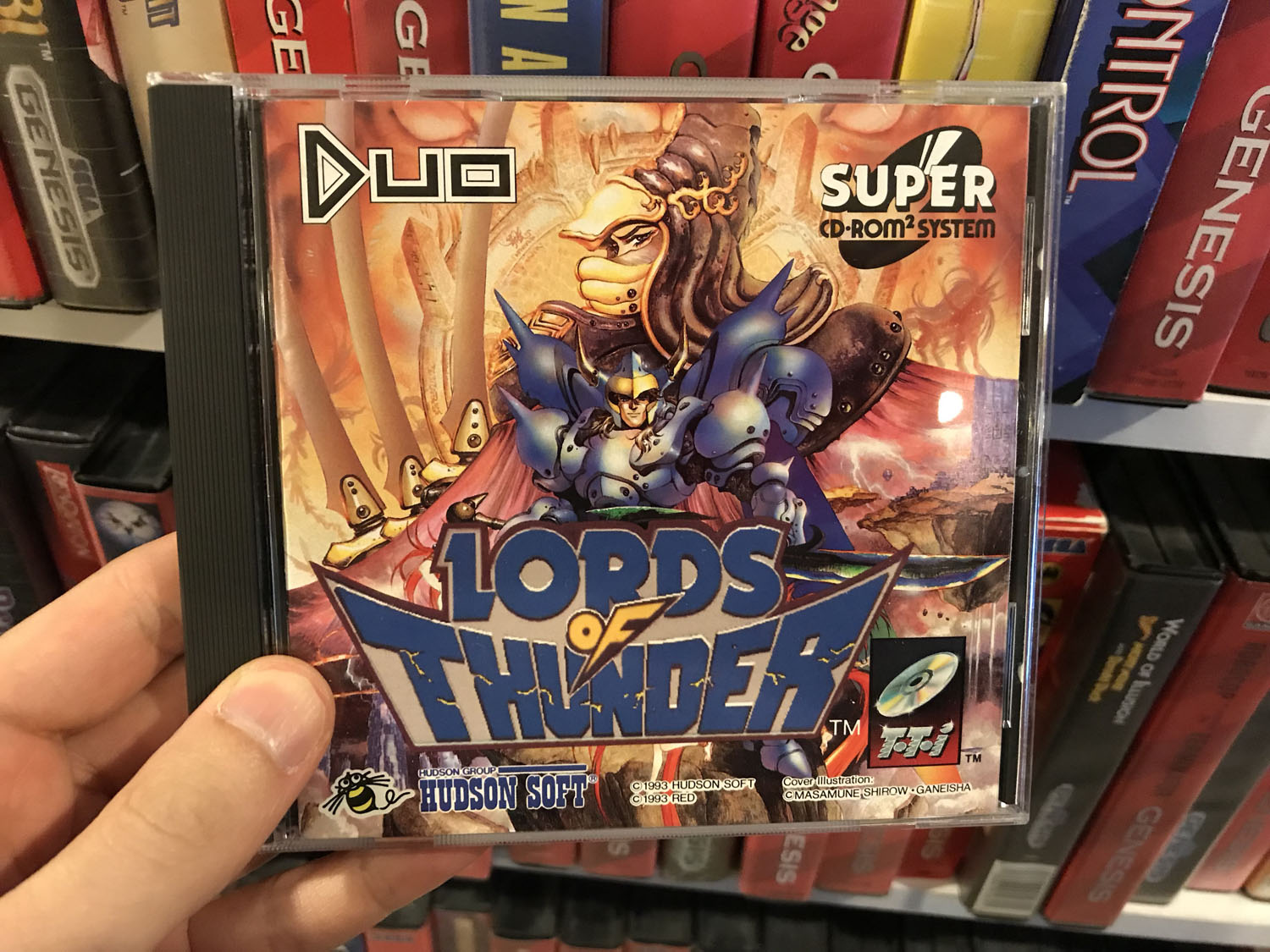 Lords of Thunder is an awesome 2d scrolling shooter by Hudson Soft that offers many different playstyles and dazzles with incredible sound and visuals.

Lords of Thunder was always one of those games that I’d always see in magazines but could never play because I didn’t have a Turbografx-CD system.  I didn’t get a Turbografx at all until I was in college and I’ve slowly been learning what I missed out on over the years. The game’s soundtrack seems to be talked about more than the actual gameplay, and I always wondered what the game was really like.  Now that I’ve played it, I can definitely say it’s worth going through the trouble to give this game a try.

You play as a magical flying knight who travels through a bunch of elemental-themed stages to defeat all the bad guys.  There’s an actual storyline but.. what I said still stands.

Let’s get the music out of the way first.  Lords of Thunder has an incredible heavy metal soundtrack recorded by very talented musicians.  It’s the thing that Lords of Thunder gets the most press for, so I don’t want to write the entire article about it.  For sure though, this soundtrack is so amazing even by 2017 standards, and I can imagine how mind-blowing it must have been back in 1993.

If I can’t convince you to try the game, I’m sure you’ll have a great time listening to the OST instead. Lords of Thunder features 6 stages you can play in any order, and a final stage which unlocks when those are completed.  There’s nothing in the game’s design that dictates the best order of stages to play like in Mega Man, but instead, each player is going to develop their own personal preference as they play the game.

Lords of Thunder is pretty difficult in a trial-and-error kind of way.  This is a game you have to play many times and practice before you can actually beat it, because it gives you limited continues.  Levels require experimentation and memorization to get through without dying, and bosses will slaughter you quickly if you’re not familiar with them.  The game is set to the easiest difficulty by default, so you’re not going to find any relief in the options menu.

Memorization of quick surprises in levels is key to getting through.

The playstyle variety comes largely from the 4 different armors you can select at the beginning of each level.  4 choices might not seem like a lot, but this game succeeds at making each armor very different from each other.  These 4 armors are all good on most levels, which means you have a lot of freedom in this game as to which ones you use and when.

Each armor has 3 different tiers of power based on how many Mystic Orbs you collect.  Tier 3 is very powerful and can rip through enemies, but you can lose it extremely quickly by getting hit a couple times.  This is definitely a game where you can’t relax no matter how powerful you become.

Earth Armor gives you 2-way bombs like Gradius has, except these are obscenely powerful.  Unfortunately, they only attack vertically and leave you with a fairly weak machine gun to attack forwards.  They also don’t have any piercing power, so they won’t be effective against enemies surrounded by obstacles.  There are a multitude of situations in this game where Earth Armor will vastly outperform the other 3, but quite a few situations where it’s the weakest.

Earth Armor excels at attacking vertically, but doesn’t offer much else.

Wind Armor, in my opinion, is the most balanced of the 4 choices.  It’s a forward traveling laser attack that can be upgraded to shoot diagonally, and pierces through all objects.  While the piercing has situational uses that the other armors except Fire can’t match, Wind really seems to me to be the safe choice that doesn’t really excel or fail in most situations.

Fire Armor is probably the most powerful armor of the four, but is the most difficult to control.  The three tiers of attack are very different from each other, and the 3rd tier is very unwieldy to use despite its high damage and piercing.  Fire Armor also has the benefit of having a very useful 1st tier, which can help you get started early in the game or help you hang on for dear life if you’re nearly about to die.

Fire Armor can be difficult to use, but offers great damage.

Water Armor has low damage and no piercing abilities, but its spread of projectiles dwarfs the other armors.  While I think all the armors in this game are viable, Water is the hardest for me to recommend personally.  Its main draw is being able to attack behind the player in a giant spread, but only when it’s fully powered up.  A hit or two will knock you down to being in a very weak situation.

Water Armor has the best spread of all the choices, but its damage is low and it’s much less useful when there’s nothing behind you to attack.

Each armor also has its own Bomb attack which have various strengths and weaknesses compared to the others.

One unique feature of Lords of Thunder is the melee attack, which automatically triggers when you’re close to an enemy.  I love context sensitive melee attacks in 2d games, like you see in the Shinobi and Metal Slug games.  I’ve always wondered why it’s not a more common feature.

The sword deals incredible amounts of damage.  Unfortunately, enemies in this game, like most shooters, like to shoot bullets out of their bodies.  Which means you being too close will often result in you taking several point blank shots to the face faster than you can dodge them.  The high-risk, high-reward nature of the sword makes it fun, and you’ll constantly be dropping in and out looking for opportunities to steal tons of damage and get away without getting hit.

Sword strikes can let you score large amounts of damage quickly, but you will likely eat a lot of damage if you overuse it. You get to visit a shop at the beginning of each level, and everything you can get is good.  You definitely want to work hard during the levels blowing up as many enemies as you can and collecting gems to afford the good stuff. While gems and money are everywhere, once you get to the store, you typically can’t afford to buy too much. Everything you can buy will get used up quickly during the levels if you’re careless.  And that includes the extra continues that you can purchase.

This game has a lot of boss battles in it, and each one is wildly different from the other.  Most of them can destroy you really quickly if you don’t know what you’re doing, so expect to attempt them multiple times until you get it right.  Like the game’s levels, different armors can give you an advantage in different boss fights.

Bosses can be difficult even if you’re familiar with their attack patterns.

In no way is this game lacking in awesome boss fights.

So, what are you in for if you decide to play Lords of Thunder?  Expect to play and replay the game over and over until you get good enough at it to beat it.  If you can beat this game even on the easiest difficulty, you’ve definitely earned my respect.  You have to do everything on a limited number of continues, and you’ll get obliterated quickly if you relax your attention even for a couple of seconds.

Practice a few stages that you think you can get good at, and put those at the beginning of your main run.  As you complete those stages, you can power up via the Shop and make the remaining stages you are having trouble with a bit easier.  Constantly change armor types and figure out which ones you like for each stage.

The thing that makes Lords of Thunder great is how different it is from every other shooter.  There’s no one standout gimmick that makes it totally unique (like say, the polarity feature of Ikaruga), but the game is a melange of many quirks that add up to a game with its own personality and identity.  The fact that it’s a fantasy-themed shooter instead of a sci-fi shooter also helps it stand out more.

I also really admire the fact that the game gives you tons of wiggle room to come up with your own strategies to make it through.  Different players are going to play Lords of Thunder differently, and even strategy guides written by expert players confirm that there’s a lot of personal preference that goes into how you get through the game.  And I think that’s a sign of masterful game design.

There is a Sega CD port of this game which I’ll be doing a separate review for.  It’s definitely different from the Turbo-CD version.

This game became a bit less obscure when it was released on the Wii Virtual Console, but I still think there’s a lot people who haven’t played this game who would really like it.  I certainly believe it’s one of the best shooters of its kind, and a rockin’ fun time.