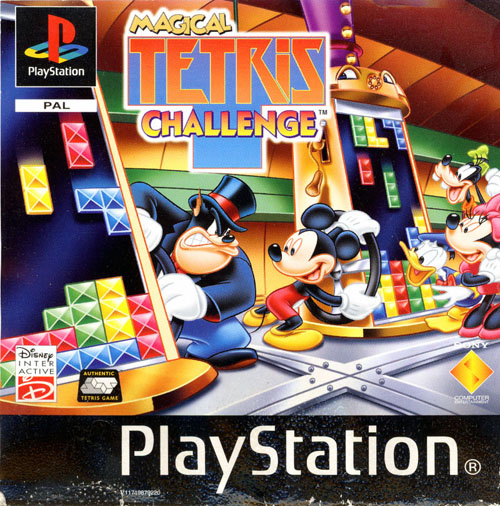 I just recently got a modded PlayStation that can play Japanese released games. So I’d like to take a look at a Disney puzzle game which I believe is very rare to find here in the US.

The era when Capcom used to make Disney games was a great time to be alive. Magical Tetris Challenge is yet another astoundingly good Disney Capcom game, and was also produced during Capcom’s golden age of arcade games.  It is an extremely beautiful, polished and fun experience.

The version of the game I played to review this is the Japanese PSX version (there was no PSX version released in the US). There was also an N64 version which is pretty close to the PSX version, and a GameBoy Color version which is very different from the other two.  I prefer the PSX version because the music in this game is so good you really want the CD quality audio, but the audio in the N64 isn’t exactly bad either.  The Japanese version is perfectly playable if you can’t read Japanese, but you’ll miss out on cutscene text and the options menu requires a little bit of trial and error, not too bad.

Magical Tetris Challenge features three modes. You get standard Endless Tetris, Versus mode and Magical Tetris.  The standard versus mode in this is called Updown Tetris. The difference from usual Versus mode in Tetris here is the Magical Meter, which clears a huge chunk of the board for you when you fill it up.  This game covers all the bases with standard modes you’d expect from a Tetris package,  but the exclusive game mode Magical Tetris is the real draw of this title.

Magical Tetris mode is a twist on the competitive 1v1 Tetris modes you commonly see in these games. Instead of filling the bottom of your opponent’s screen when you attack them with multiple line clears, you send them crazy pieces they have to use. This is a Tetris game before the era of piece holding, so you have to put everything you’re given somewhere, even if it’s a crazy zigzag piece or 4 gigantic 5×5 blocks in a row.  This game can get really nuts. The reason Magical Tetris mode is so fun is it’s extremely hectic, and it’s more about desperately hanging on for dear life instead of trying to be a Tetris perfectionist.  Setting yourself up for Tetris 4-line clears is extremely dangerous because by the time you get set up, you’re going to be sent some really insane pieces that will throw a wrench into your carefully laid plans.  Being sent incredibly awkward pieces and actually figuring out the right places to put them without creating gaps is incredibly satisfying, and using the special pieces to do a 5 line clear Pentris is the most satisfying part of all (especially the mayhem it’s going to cause for your opponent).  It’s all very exciting, and there’s enough variety in the matches to hold your attention for a long time. This is a fantastic head to head game, and I’m astonished that not more people talk about Magical Tetris Challenge.

The crazy pieces your opponent sends can either kill you or be used to set up Pentris opportunities.

The game has multiple story and endless modes, and with the extreme difficulty of the Expert difficulty, there is a lot in this game to keep you busy.

The music is very great, I especially like Minnie Mouse’s theme and Donald Duck’s funky wah-guitar/slap-bass song.  You also get that Capcom graphical polish you’d expect from this era.  The spritework is great, and they even took the time to give each character a different costume to match the theme of the level they’re playing in.

The music in this game is pretty rad.

If you’re a fan of Tetris, you absolutely must play this.  This is a puzzle masterpiece, and one of the better multiplayer variants of Tetris that exists.